A 7 AM Cattle Drive 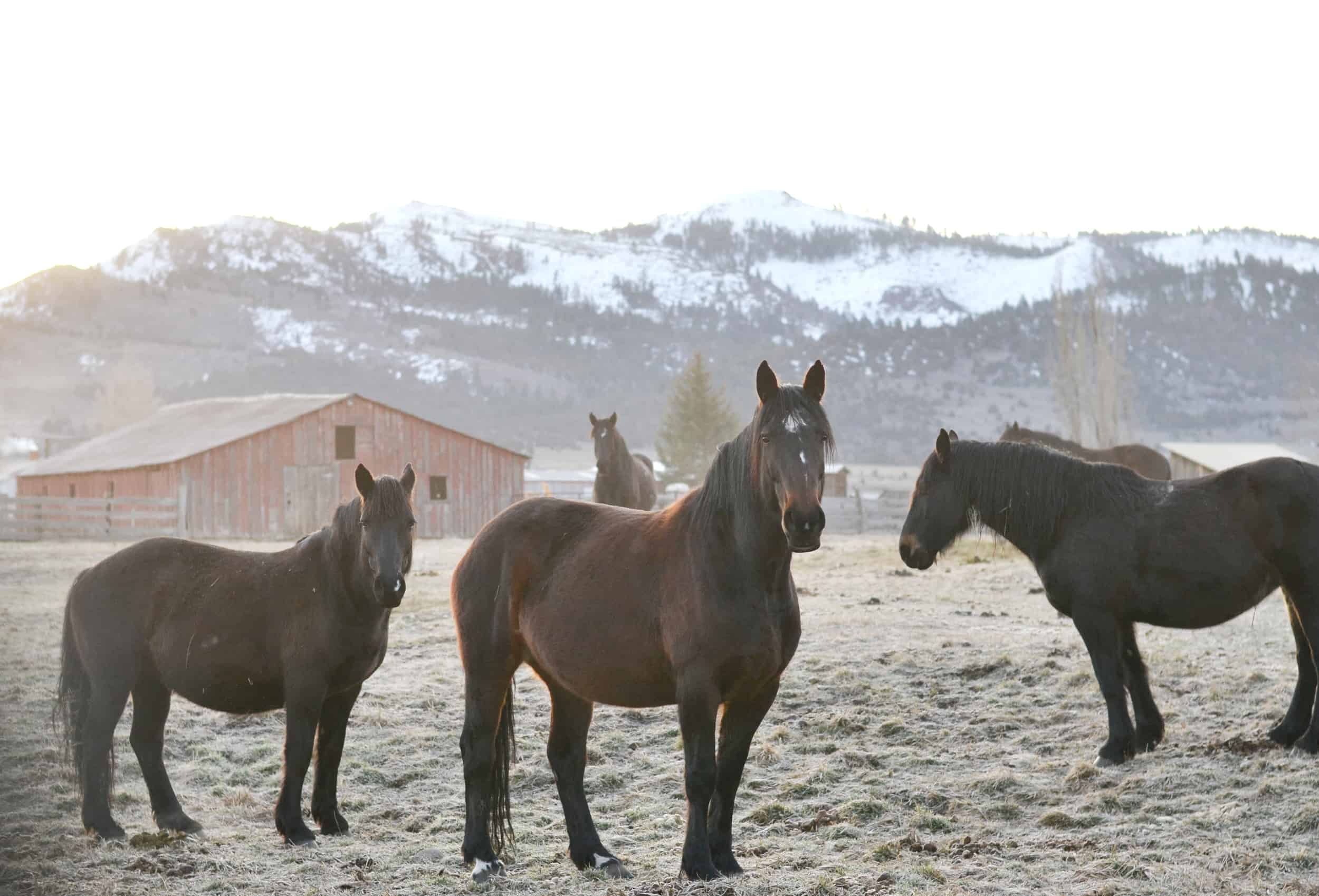 Earlier this week, I went to work with Greg to help the guys move a bunch of heifers from the center of the ranch, to the outskirts of it (near our house). I know, I don’t know what I was thinking either. I usually traipse around the house in a robe, or in the buff, with my camera and paint brush in hand, simultaneously annoying the chickens with my paparazzi skills or making a mess in my craft room. Having to be at the ranch, by 7 am no less, was really pushing my self built boundaries.

But the girls’ gotta move, and without my help and immense knowledge base of cattle moving, the boys probably wouldn’t have been able to get them from their comfy field down to the maternity ward (aka our front yard). The heifers spend their winter months near the barn, and right when they’re about to give birth, we move them 12 miles. Because what 8 month pregnant lady wouldn’t want to pick up and move shop a week before giving birth?

A heifer is a special name for a first calf mother cow, basically the teen moms of the cattle world.

I don’t think I’ve been up at 7 am since…ever? I promised Greg that I wouldn’t go to bed late, but 1 am rolled around, and I was still awake, sending snapchats and doing other important things. When I finally fell asleep, I felt like 5 minutes passed before Greg was waking me up, “Get on up girl!” The same quote that they say to the cows. Hmm.

I peeled myself out of bed, and managed to slap some eyeliner on, and pour myself some coffee before getting booted out the door. Rodney (Greg’s uncle) had picked out my horse for me, so it was a mystery who I would be riding that day. Since I’m a woman, who dares to leave the kitchen (God forbid), I was expecting Rod to pick out the bomb proof horse, Amos. The same horse they put grandmas, children, and cocky Cowboys on. To my surprise, he had brought in Julius for me to ride. If you don’t remember, Julius is my favorite horse on the ranch because he’s white and very majestic. Greg usually rides him, but today, I had the honor. I also got to ride the Harwood saddle again. Basically I was the queen of the cattle for the day.

We got started and per usual, sang made up Spanish cowboy songs, and began moving the girls to their new home. My particular favorite, “Perro baderro, perro baderrrrrrro. Margarita, horchata, baderrrro.” 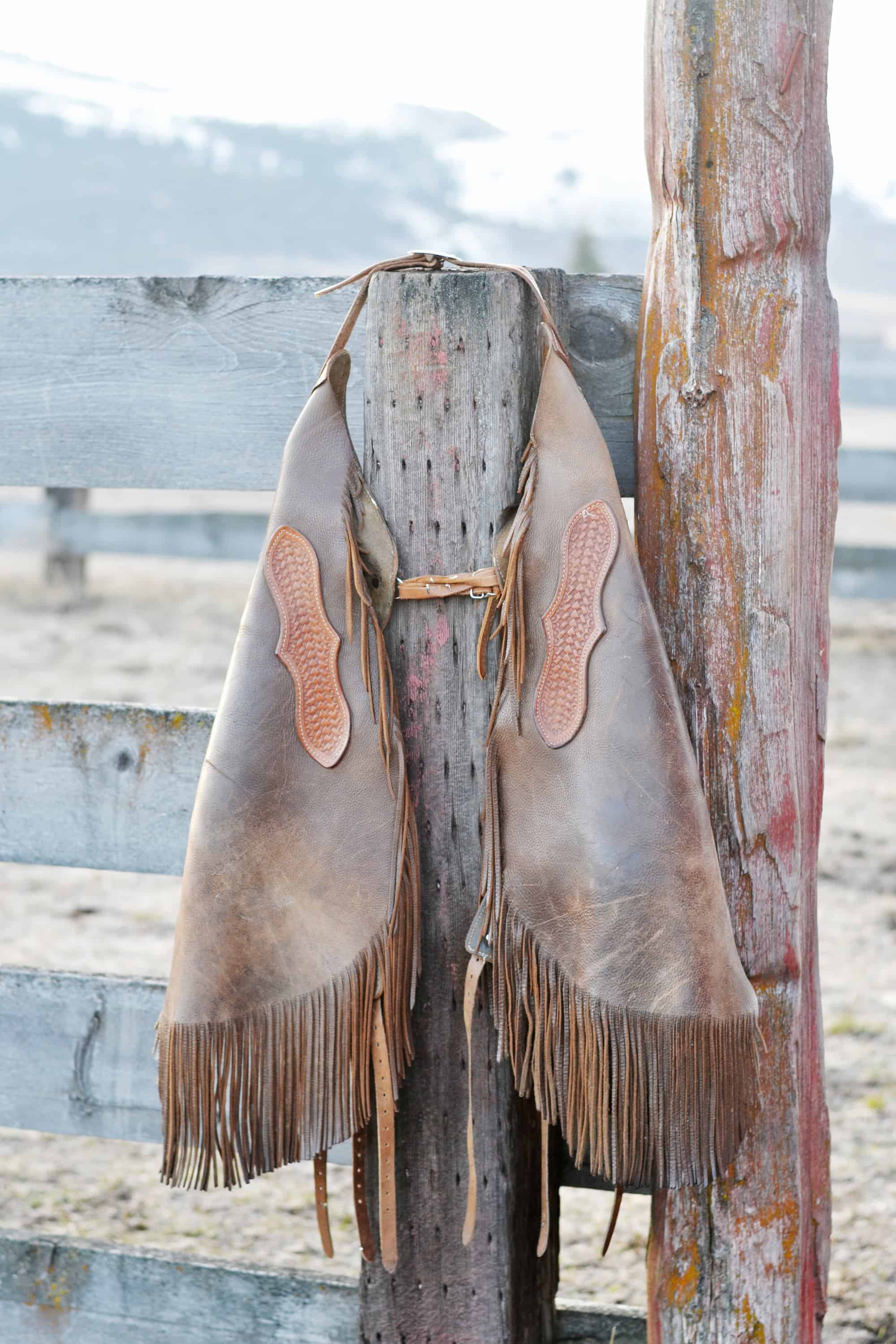 About an hour into the ‘drive’ we ran into trouble when a truck drove through the herd, is it too much to ask for people to stay home on days we have cattle drives? I mean, it’s not like people have things to do right? Totally kidding!  The truck sent the girls in every which way, which sent Greg and Lionel running into the hills, and left Julius and I standing there like a deer in headlights with a human on its back. Luckily, Julius is smarter than I am, and knew what to do. I simply sat on top (with my crown in tact), and he jumped to the right and left, blocking the cows from running back to home base. I must say, he made me look good.

Meanwhile Greg and Lionel went zigzagging through the trees to group the heifers back together. Usually, we would have had two more men on the ride, but both were very selfishly sick, one of them even had the nerve to have his appendix taken out. Didn’t they know I wasn’t a cowgirl? I wasn’t supposed to have his much responsibility! 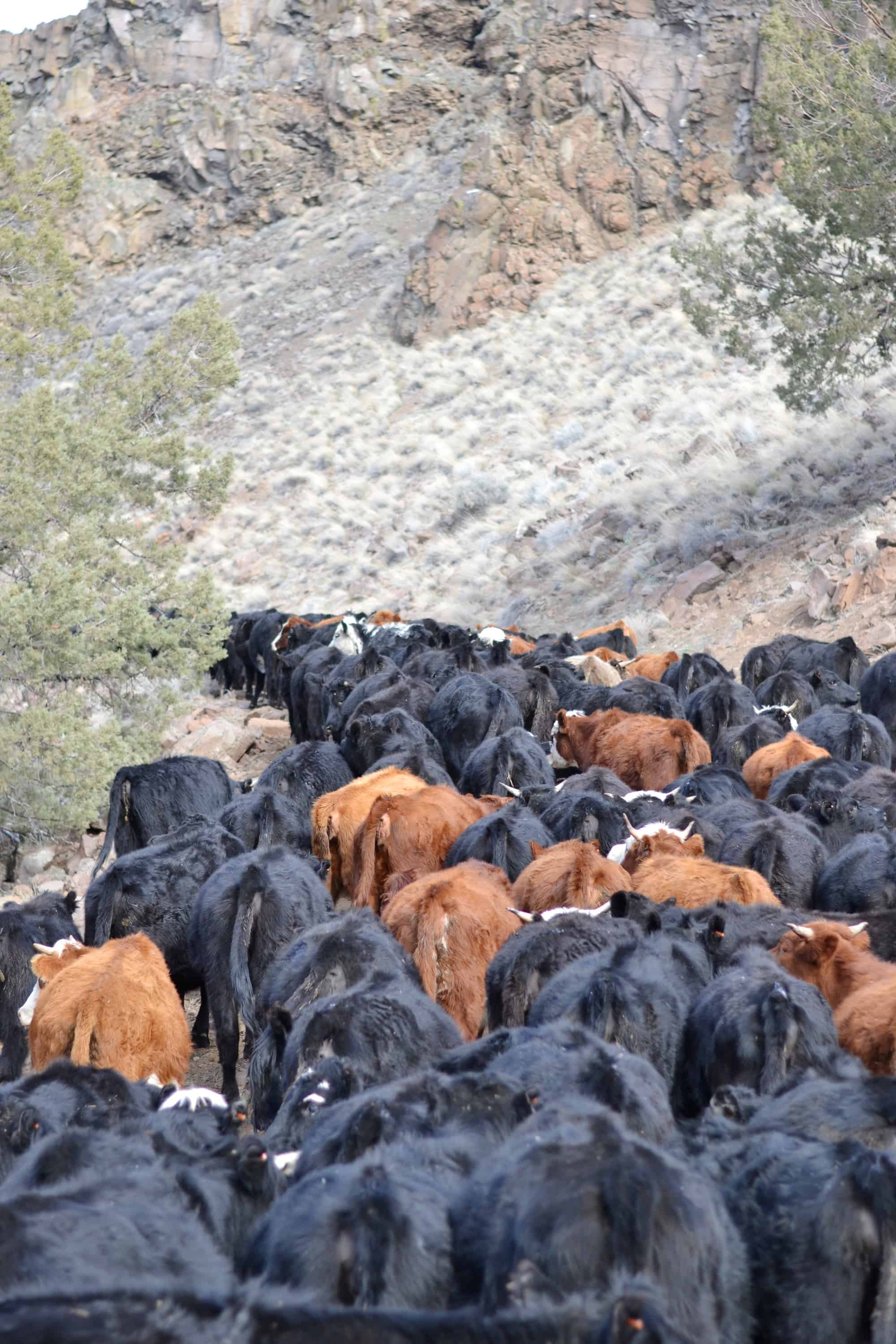 Thanks to Catrina, Lionel’s dog, we were back in business in no time and started moving the girls down the road again. When it came time to exit stage right, and start moving up the mountain, we ran into major trouble again. This time it was very stressful. The girls didn’t want to move up the mountain, so as we pushed and hollered, they simply just looked at us like “it’s going to take a lot more than a horse and a whistle to get us to moooove”, but the road we were on started crumbling down the 100 foot cliff. Some of the heifers started to lose grip and nearly tumbled off the edge. We weren’t sure what to do, we needed to get them to move, but they didn’t know what direction to go. Lionel volunteered to walk his horse along the ledge of the cliff, and I held my breath for the full minute it took him to get to the front of the herd. When he finally got there, he grouped some of them up, and moved them forward hoping the rest would follow suit. No such luck. 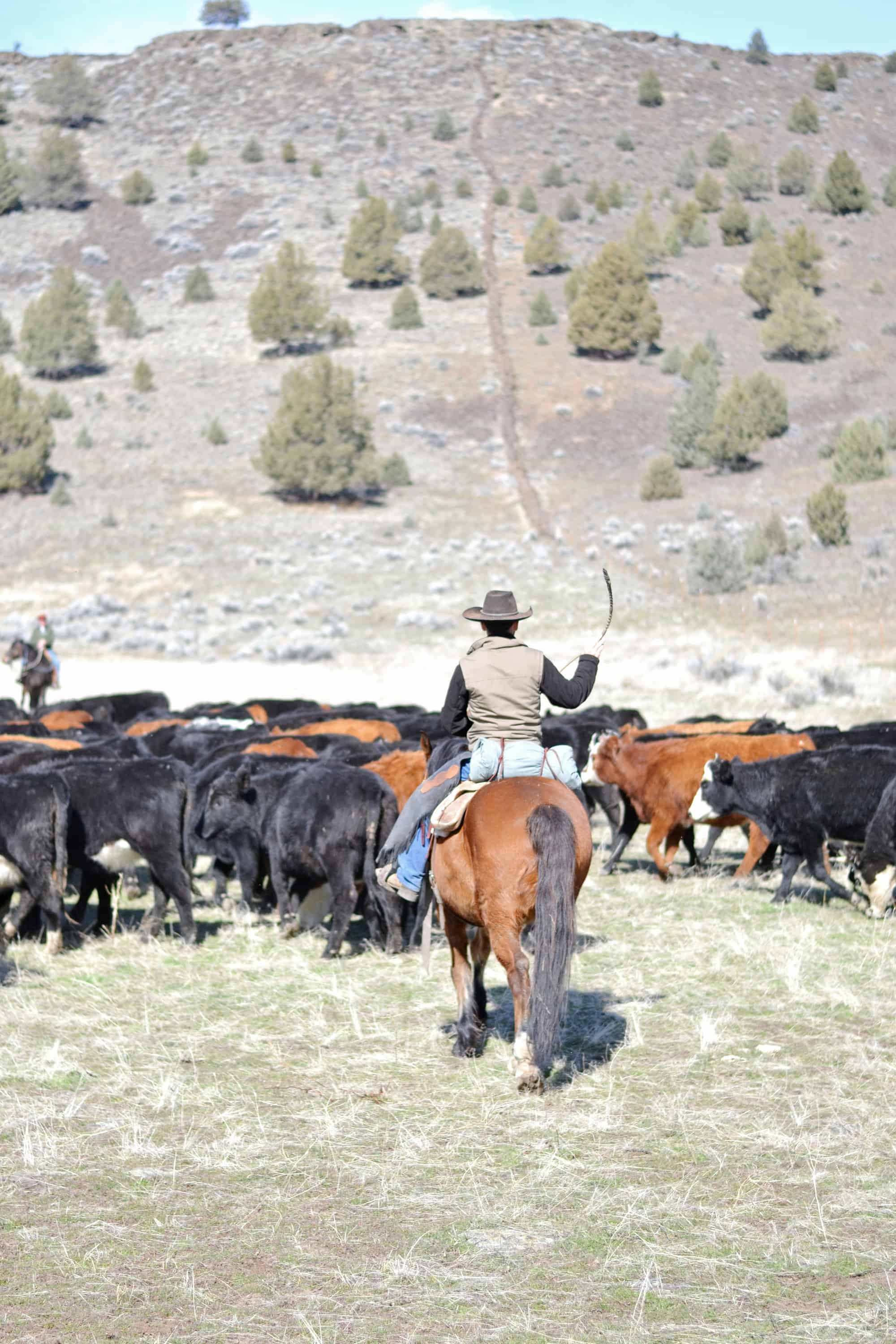 So now Greg and I were stuck at the back of the group without Lionel or Antonio. Then, to make matters worse, the heifers started moving up the side of the mountain. At this point they were moving in every direction except the direction we wanted them to go. Finally, to our relief, Lionel was able to sweet talk the rest of them into following their friends (something like promises of molasses and alfalfa), and we were out of our rut.

The rest of the day was uneventful, we moved them into the mountains, over the peak, and down into the valley which will serve as the maternity ward of the ranch for the next month or so. Welcomed by water and hay, the girls were happy to settle into their new field. 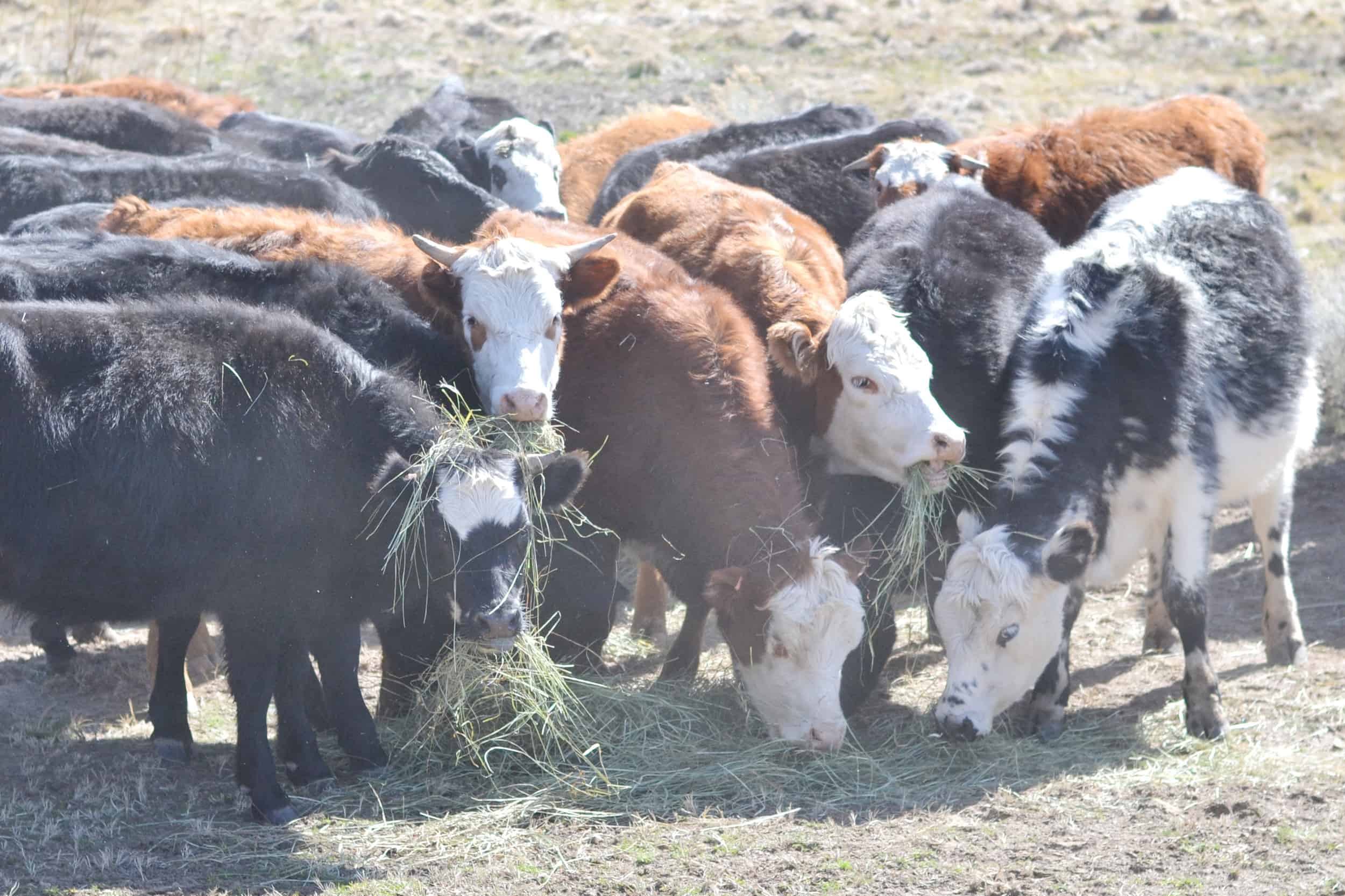 It was fun for me to actually have some responsibility and be put to work instead of just sitting there pretending to be the rodeo queen of Jess Valley. Over the next few weeks, we will start calving, and Greg will have the super fun title of Dr. Calvesalot. Hopefully Alex will be recovered from his appendix removal, because he’s the night Doctor. If not, I don’t think I’d mind being a night nurse! As the babies start being born, some of them will need to be bottle fed, and I think y’all can guess who will be doing that!!

Next week I’ll be cooking a big dinner for the boys after they move the next bunch of cows down! See you then!