We practice a method called ‘culling’ with our cattle. Culling means that whenever we see an undesirable trait in an animal, we remove it from our herd, either by selling it, butchering it, or removing it from the breeding pool.

For example, if a heifer gives birth to a blind calf, we will sell the heifer and the calf. If a bull becomes mean or shows signs of bad genetics, we will castrate him, and sell him.

Please take note that I have a marketing degree, rather than an ag degree, so some of my points might not be textbook, but I’ll do my best. For example, ‘baby boy‘ isn’t a term that you’d probably find in an ag class. ;)

After calving season, during the various brandings, we select the best baby boys to become bulls, meaning, they get to keep their manhood intact during the branding.

However, throughout the year of calf adolescence, a young bull can develop signs of naughtiness, causing him to go into the “turn him into a steer” field. By turning a bull into a steer, it means, we remove his breeding capabilities.

Year-old bulls are more developed than calves, and it takes just a little bit more finesse to remove the parts. I would like to think that a woman’s touch, is just the thing.

Although not a woman, Emiliano, our cattle boss, has the magic touch when it comes to cutting, pulling calves, roping, doctoring…you name it, he can do it. He is also a wonderful teacher, and has taught Greg nearly everything he knows.

When I caught wind that the boys were planning on cutting the bulls, I decided to head up and take some photos of the roping and the scenery. I watched diligently as Emiliano cut the sacks open, pulled the parts out, removed the muscles, tore the veins, and sliced the nerves. It was very fascinating to me how quickly and smoothly each calf was processed.

The second day of bull cutting, two of my girlfriends came to take photos as well. They asked me if I was going to do any of the cutting, and just like that, I learned how to turn a bull into a steer. 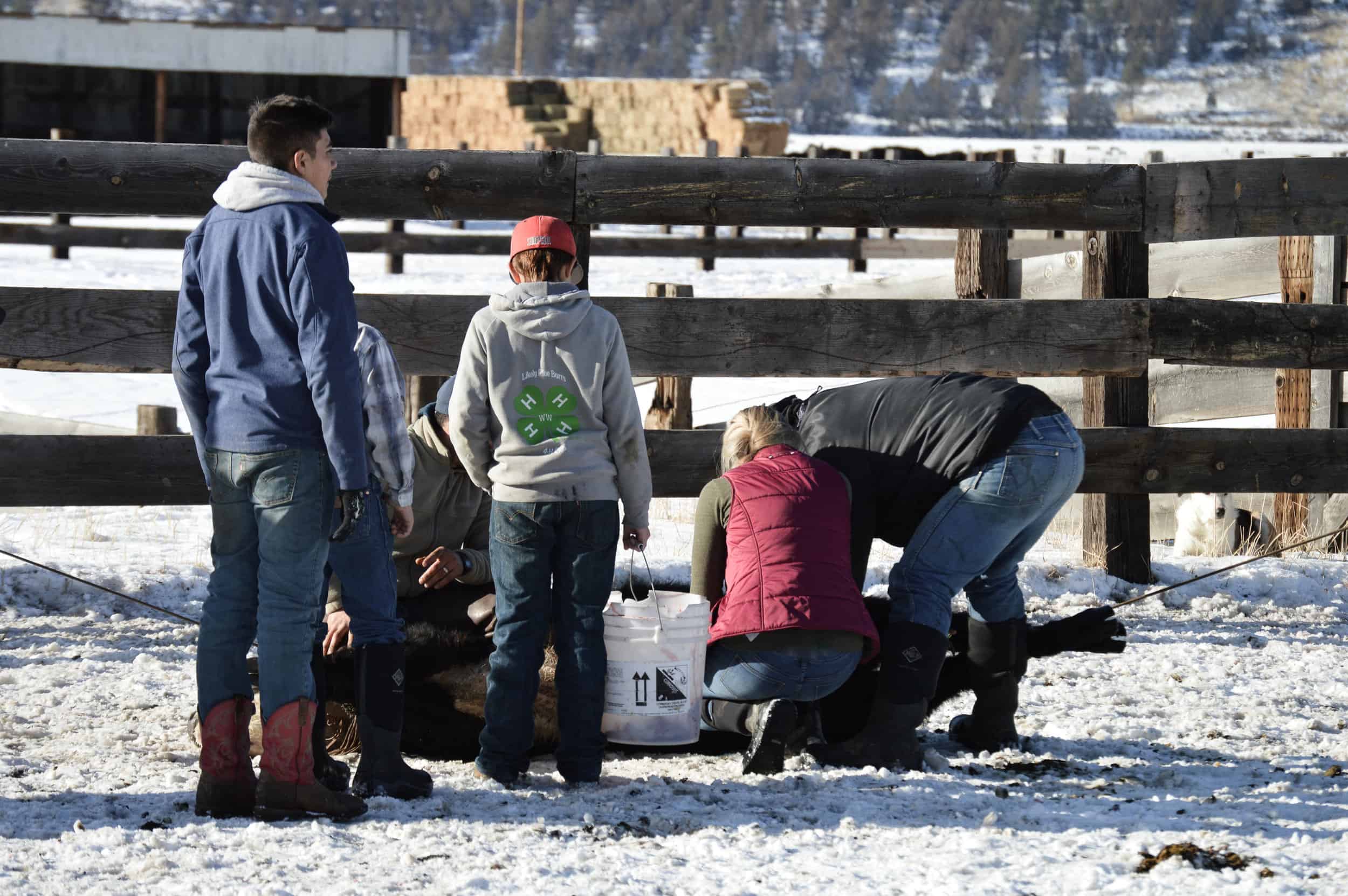 Rodney’s words, “well, go ahead, so long as they live,” echoed in my ears when I made my first cut. It looked like a lot of blood to me, and I was terrified that I had cut too deep, but Emiliano assured me, it was okay.

The boys continued roping the calves, and I became comfortable slicing into the sack, removing the parts, tearing the veins, and slicing the nerves. I have to say, it was pretty darn empowering.

After all of the bulls were finished, I said a prayer that they would all be alive the next morning. I didn’t want to get fired my first day on the job.

The next morning I walked to the barn and was greeted by Rodney, I was a little too afraid to ask if all of my steers made it, but he said, “Well, I didn’t see any dead.” 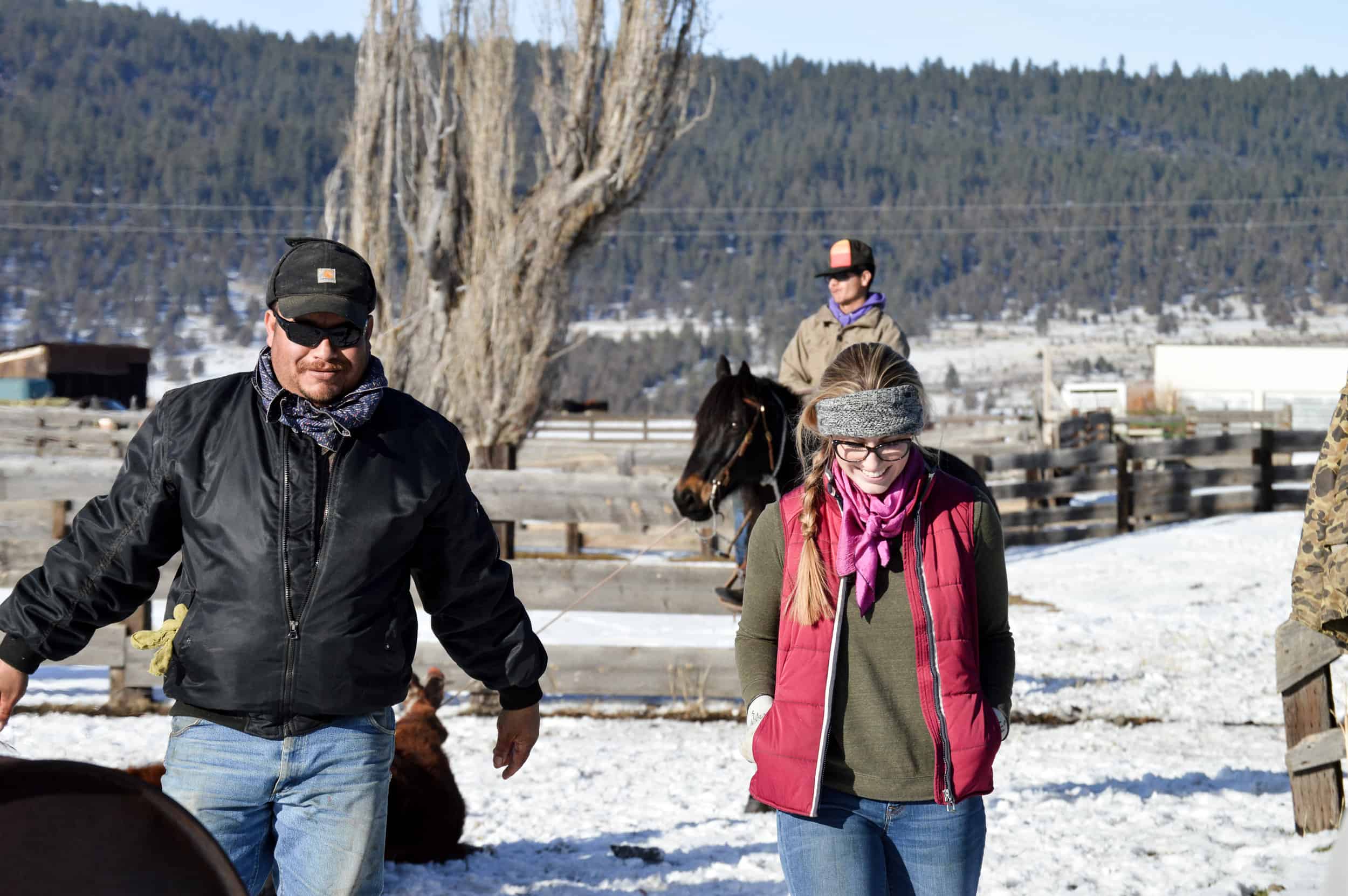 Walking back to the irons after a cut, listening to Emiliano. |  Go Left Photography

I guess that was his way of saying, good job.

I am excited for branding season to start so that I can learn how to cut young calves. I am not one for blood and guts, in fact, I faint at the sight of needles, but there’s something very different about working on animals. You know that what you’re doing is necessary and important, and there isn’t time for dramatic emotions or worrying, you just gotta get ‘er done.

I hope you have enjoyed reading this little snippet from my adventures out here on the ranch. I feel somewhat funny sitting here writing a whole story all about myself, but you keep encouraging me to share more. So thank you for being my biggest cheerleaders, and for laughing along with me.