Using a jackhammer and elbow grease, removing old brick is tedious, but something you can definitely do yourself!

Things have been quiet around here this week. I apologize for my absence, not that I have hoards of friends reading my posts daily, but for those of you that do, I am sorry!

I spent the early part of last week in Sonoma, which is becoming a home away from home, at the Oh So Inspired conference. I was invited to handle their social media, it was a fabulous time spent with so many creative people.

The moment I got home from the conference, my dad and I began working on breaking down the fireplace, which featured an indoor BBQ that had 60’s written all over it. We initially asked our contractor to help us with this project, but for the completed project it would have cost nearly $15,000. To cut our budget down, we decided to do what we could ourselves – removal, new door install, painting, etc… The last step will be adding veneer to the existing fireplace, which we will hire someone to do.

We only had a few days to get the project done (started, really), so we had to work fast. We woke up early on Friday morning and began chiseling away at the brick and stone that made up the BBQ. As we broke into the actual BBQ we realized that the builders had used a more intense mortar and ‘fire brick’ on the interior of the structure. Even with our air chisel, and my strong muscles, we were unable to efficiently break apart the brick. It would have taken us until Christmas. 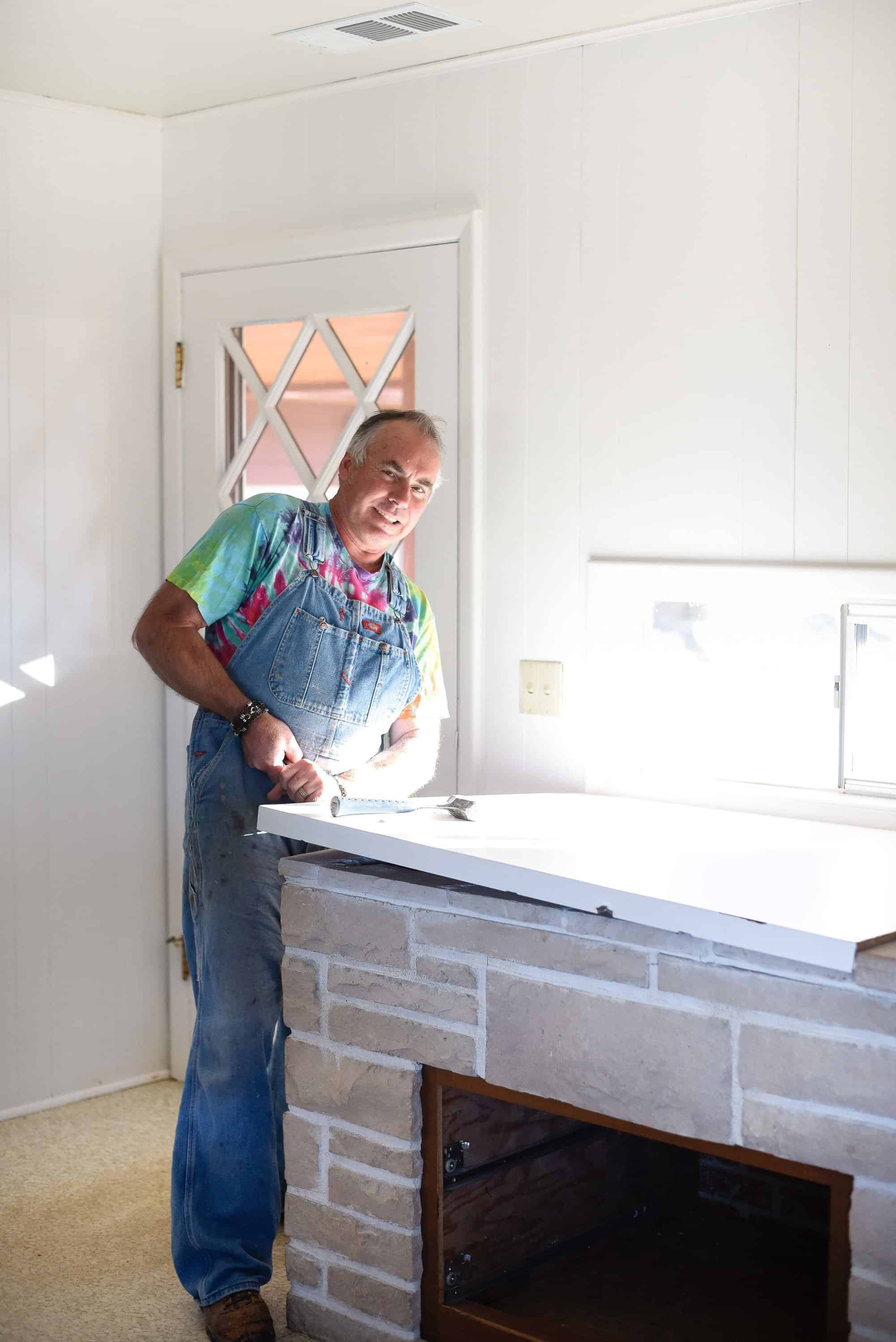 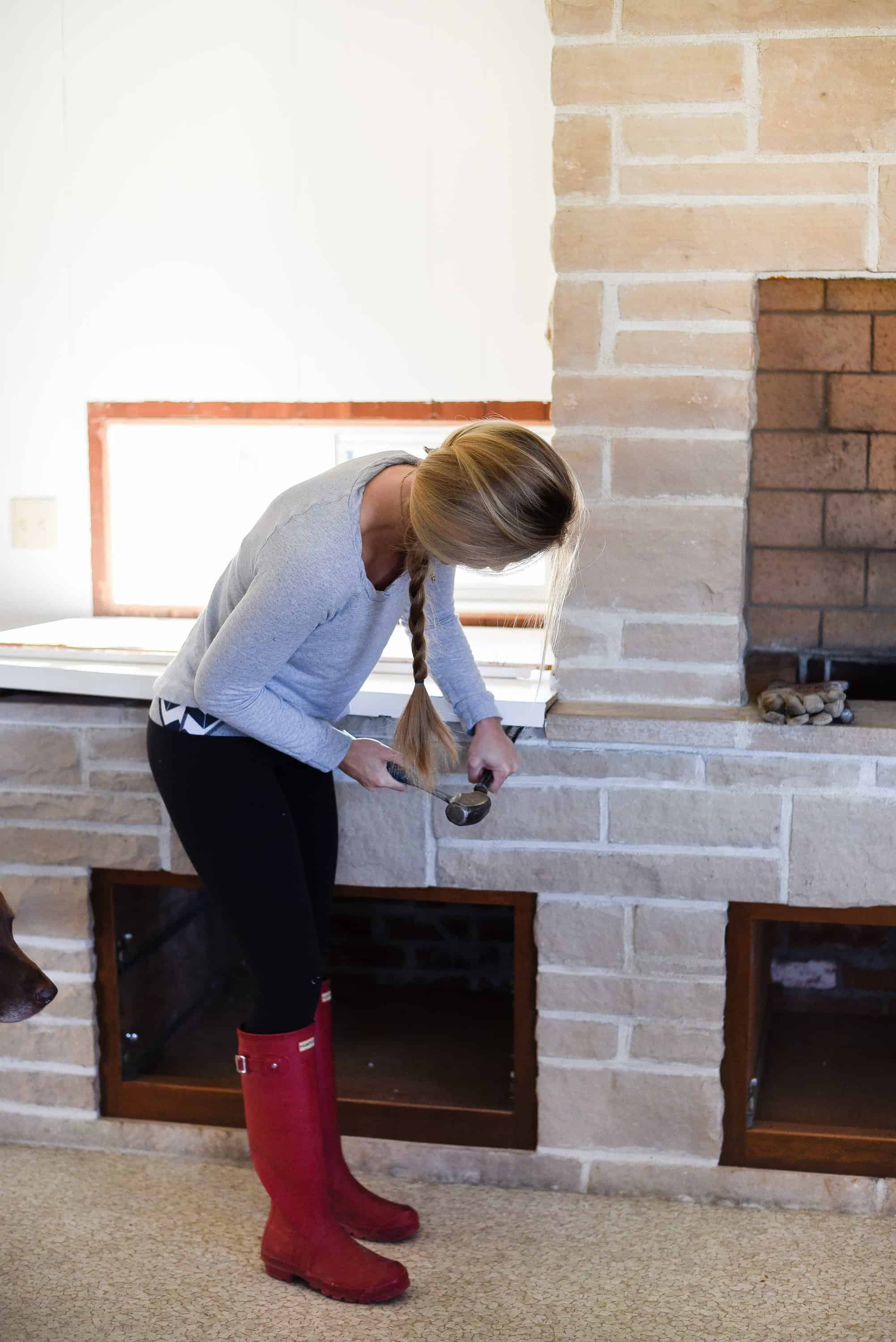 We decided to drive into town to the Ace store and rent an electric jackhammer. Once we got home, we started cooking away at the fire brick. It was so much easier with the jackhammer, I strongly recommend spending the $60 to rent it for the day, it’s an easy tool for anyone to use.

My dad used a saw with a special blade on it to score the hard stone where we wanted it to break since there were a few pieces of stone that we only needed to remove half of. After it was scored (which took a few times with the saw), we used the air chisel to break the stone pieces. 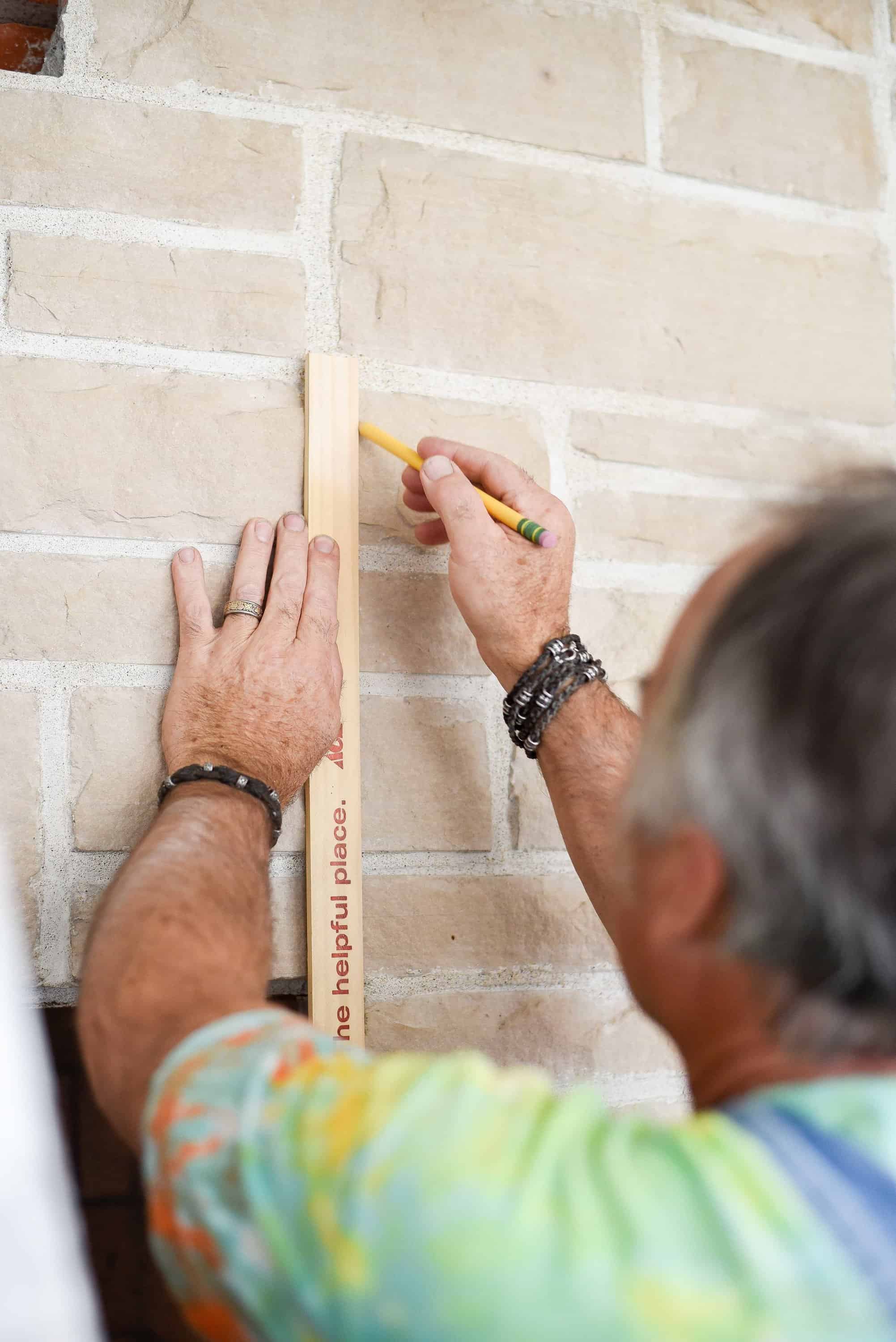 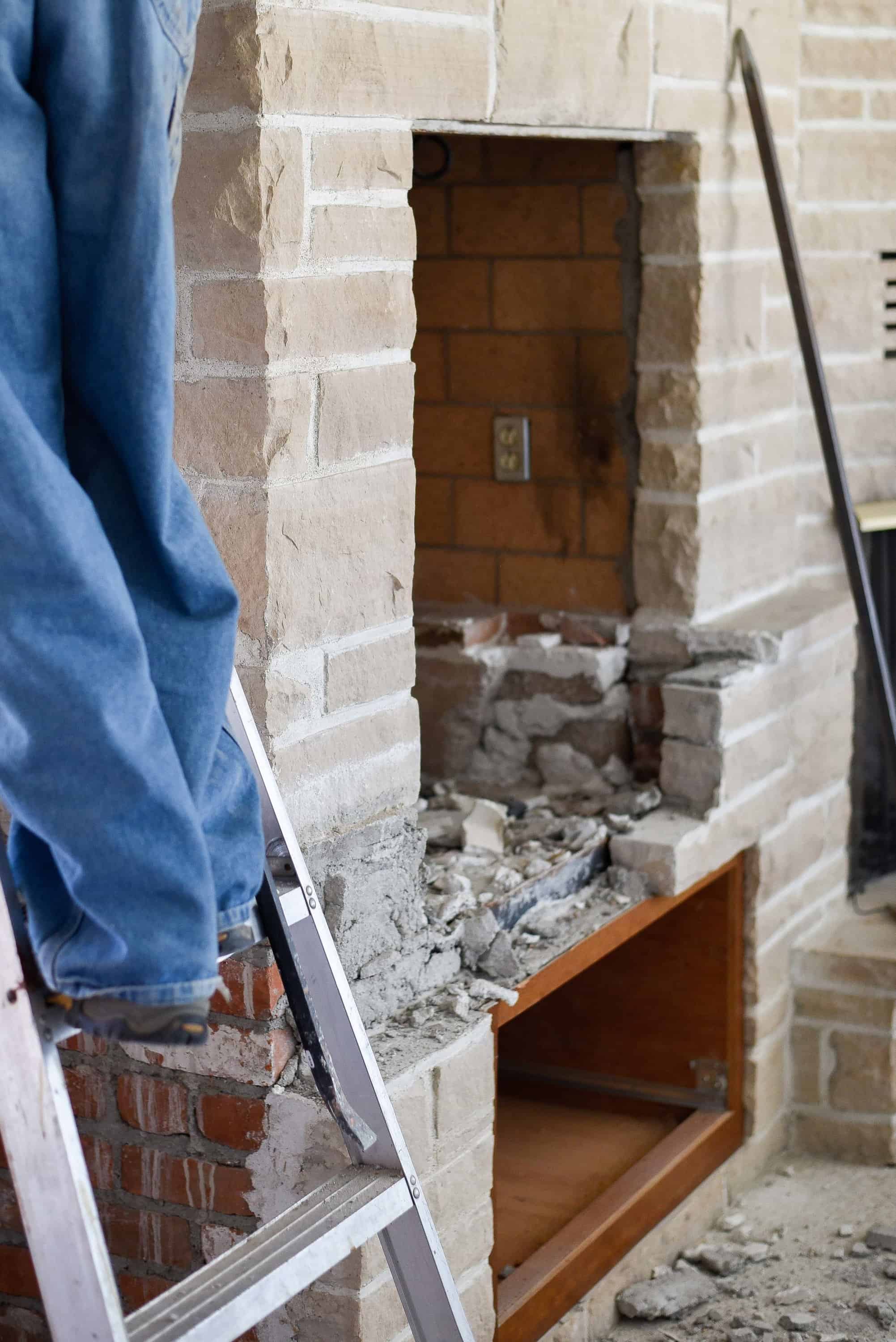 We are lucky to have a Ranger, which we filled up with the brick and stone. Every hour or so, I drove the Ranger to the dump area near our house and unloaded the rubble into a pile. On the first trip, I hand unloaded the entire thing, which burned approximately ten thousand calories.

On the second trip, I realized that the tailgate opened, so I had the brilliant idea to open it up, and drive away really fast, with the thought that all of the bricks would fall out the back. No such luck. So I found myself hand unloading it for the rest of the day.

Towards the evening, my neighborcousin Gabby arrived so that I could help her with making a birthday gift, and she came with me on one last dump run before we got into gift-making mode. As I began unloading the back of the Ranger by hand she asked me, “Do you just want to dump it?” I looked at her as if she was crazy. Then, she pulled a small lever on the back of the Ranger, and what do you know? The whole back end flipped up and dumped the rubble out in two seconds flat. I couldn’t believe that I had unloaded that thing by hand 5 times before Gabby showed me that it had a dump feature. I also couldn’t stop laughing.

We ended day 1 with a bit of work left, but we were able to complete most of the demo. On day two, we removed the remaining brick, and cleaned up all of the debris. I saved a lot of the brick for a garden path, and spent the rest of the day mopping up the red dust from the brick chiseling.

Later that afternoon, Greg cut a sheet of plywood to cover the exposed part of the roof, which is a temporary fix until we install the doors. I am currently making my final decisions on doors, but I have quite a bit to say about that, so I think I will save that for another post. 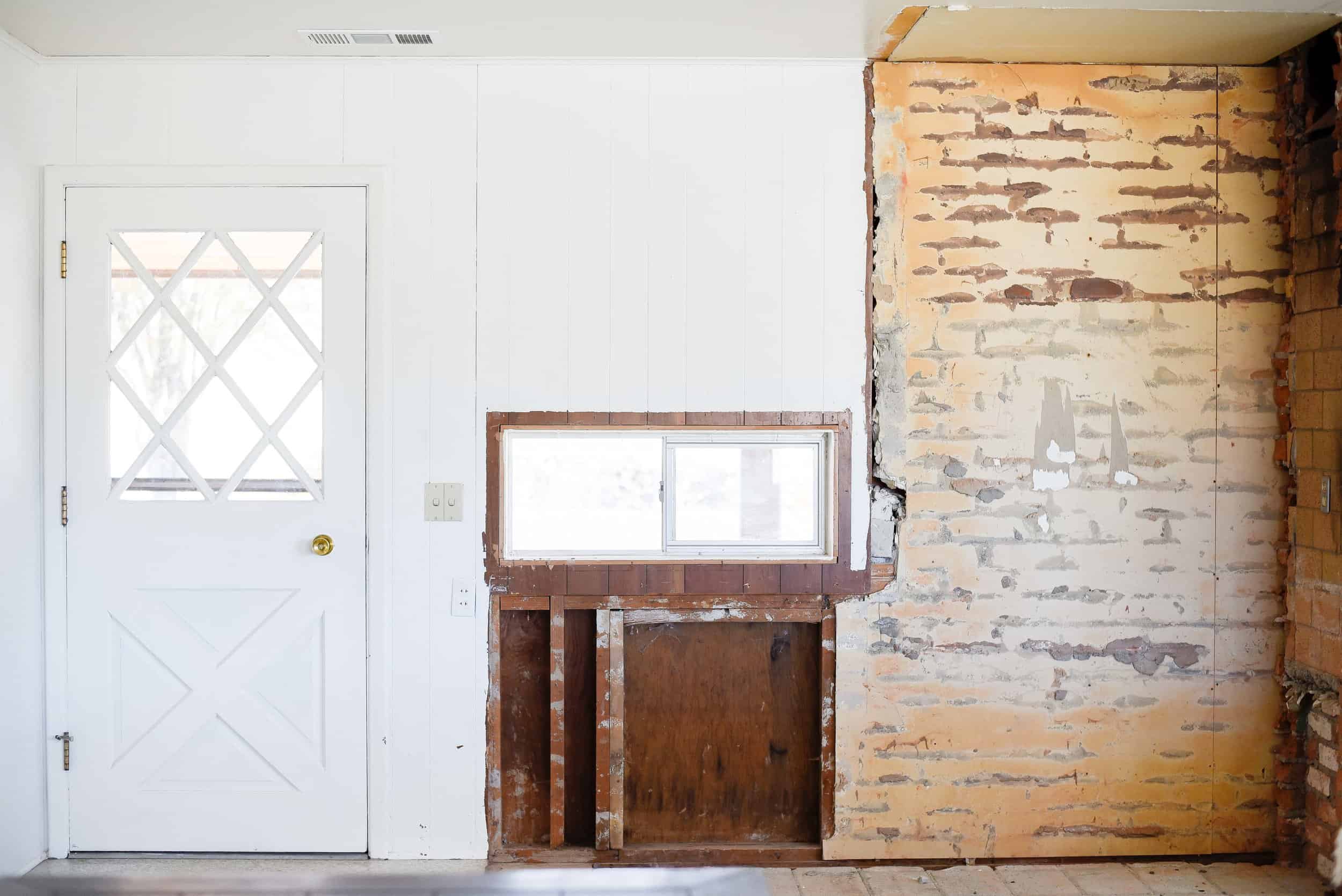 Thank you so much for following along this adventure we are on, I am so grateful you are here!